Axonics Fires Back at Medtronic with Patent Review Challenge 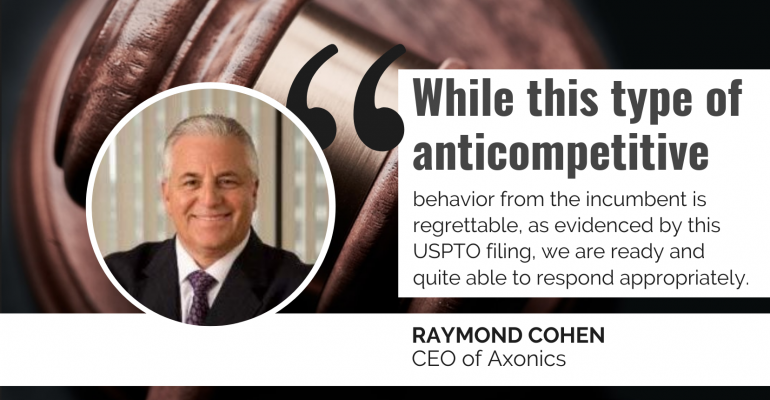 Medtronic and Axonics began butting heads last year after Axonics won FDA approval for its sacral neuromodulation device for bladder and bowel control, a market Medtronic previously held a monopoly in. The incumbent also made a strong push in 2019 to bring a newer version of its technology to the market in both Europe and the United States.
Axonics is contesting the validity of each patent that Medtronic has accused it of infringing.

In response to Medtronic's patent infringement claims, filed in November, Axonics Modulation Technologies is contesting the validity of each patent Medtronic has accused it of infringing.

Axonics said Monday that it is filing seven petitions with the U.S. Patent and Trademark Office (USPTO) requesting an inter partes review (IPR) of each of the Medtronic patents in question.

“Since its inception in late 2013, Axonics has invested millions of dollars and thousands of hours into understanding the relevant and adjacent intellectual property landscape while developing our products and our own intellectual property," said Axonics CEO Raymond Cohen. "While this type of anticompetitive behavior from the incumbent is regrettable, as evidenced by this USPTO filing, we are ready and quite able to respond appropriately. We believe that we have provided the USPTO compelling challenges to the validity of the Medtronic patents at issue and now await institution of each IPR petition.”

The USPTO typically takes six months to determine whether to institute an IPR after a petition has been filed. If instituted, the USPTO will likely render a decision on the validity of a contested patent within 12 months of instituting the review.

"Medtronic believes competition drives innovation and broader market awareness, which is good for the industry and for patients, and we welcome competitors who play by the rules and existing laws," Medtronic said in a statement e-mailed to MD+DI in November, after the company amended its initial lawsuit against Axonics to include additional claims. "We are also committed to protecting our proprietary technology and intellectual property, which drives our continued innovation. We believe these additional claims further confirm the merits of our complaint."