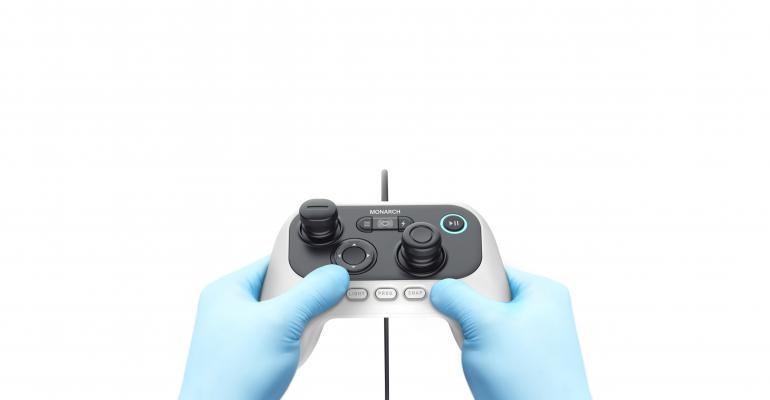 The controller for Auris Health's Monarch platform.
The Redwood City, CA-based company’s financing raise is the perfect example of the strength and support the robotics market now commands in healthcare.

The robotics market is surging. Auris Health recent raise of $200 million to commercialize the Monarch Platform is a perfect example. The Redwood City, CA-based company has raised more than $700 million to develop and commercialize the Monarch platform - a robotic system that enables more-accurate diagnosis and treatment of small and hard-to-reach nodules in the periphery of the lung.

Monarch received FDA clearance for Monarch to perform diagnostic and therapeutic bronchoscopic procedures earlier this year. The platform uses a familiar controller interface to navigate a flexible robotic endoscope to the periphery of the lung.

“The support of this group of world-class investors will be instrumental as Auris transitions into a commercial-stage company,” Frederic Moll, M.D., founder and CEO of Auris Health said in a release. “We are pleased with our progress in launching the Monarch Platform, which was initiated earlier this year. This funding will enable us to expand our commercialization efforts for endobronchial applications, and will also support our mission to pioneer the next era of medical intervention across a broader spectrum of procedures.”

Surgical Robotics 2018 and Beyond

It probably doesn’t need to be said that 2018 has been a banner year for companies with robotic solutions in healthcare. In addition to Auris Health’s significant financing raise, Medtronic announced that its long-awaited robotics platform could debut next year and Verb gave a test run of its platform to Google’s co-founder Sergey Brin. (Did we forget to mention that Medtronic also announced it would acquire Mazor robotics for $1.6 billion.)

But where will the market be in a few years? Will there still be this much enthusiasm? And with competition mounting, will Sunnyvale, CA-based Intuitive Surgical still be the top name when discussing surgical robotics.

Roger Smith, MD, the Chief Technology Officer for the Florida Hospital Nicholson Center, spoke with MD+DI in early November about surgical robotics and its future. Smith identified 67 companies that had robotic platforms to treat various parts of the body. He noted that about 20 companies have robots in hospitals now.

“If you move forward from where we are today, I would say we’re at the top of the bubble – and the bubble still could be growing, but eventually that bubble is going to pop,” Smith said during the early November interview.

He did not rule out the potential for M&A and consolidation in the robotics market. “I think there are companies that are trying to make it on their own right now that will get acquired because they fit into a portfolio,” Smith said.