Many of our readers apparently don't think they are justly compensated, according to a Qmed survey. 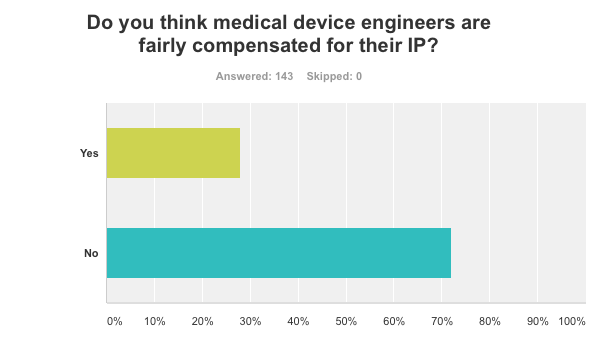 What is it that is driving engineers to risk prison time to steal intellectual property?

In 2014, we wrote of an engineer who formerly worked for Becton, Dickinson and Co. (BD; Franklin Lakes, NJ) and C.R. Bard Inc. (Murray Hill, NJ) who admitted to stealing trade secrets from the two global medical technology companies. In that same year, we also caught wind of a GE Healthcare engineer who stole millions of files from his employer and sent them to China. Then, late last year, we reported that another engineer had admitted to stealing trade secrets from Boston Scientific related to the company's Mustang catheter, which he helped develop.

We polled our audience to see if they felt poorly uncompensated--perhaps that would explain the types of stories above. It is possible that part the justification for these engineer's actions is that they themselves felt unjustly compensated.

So we put that question to our audience:

"Really? It needs an explanation?" writes one reader (all of the 143 responses were anonymous) when we asked our readers if they were fairly paid.

The degree of frustration quickly became apparent when sifting through your responses.

While approximately 72% or 103 of 143 of poll participants stated they did not feel fairly paid, the remainder faulted engineers for agreeing to sign away their IP when entering into an employment contract. "Employees sign a contract that states their rights to IP and their compensation. The time to object and negotiate is then not after you sign. Employers don't 'steal' IP; employees sign it away from the beginning."

The bulk of the responses we received, however, explained why engineers were underpaid. Some readers lamented that working at a startup was not a realistic option and that they felt forced to enter into an employment arrangement that ultimately exploited them. Many recommended that they are paid a percentage of the profits that their products ultimately generate.

All of the quotes below are from different participants in our anonymous poll, sorted in two camps--those who felt unfairly compensated and those who felt like their pay was sufficient:

"Any invention disclosure submitted to my company becomes my employer's property. Why is it that surgeons are paid royalties for products that they conceive of and let manufacturers make and sell, but engineers are laughed at by executives when looking for similar compensation?"

"When you work for a company, you sign over all rights to your ideas to the company in exchange for a yearly salary and maybe a bonus."

"Negotiating the ownership of IP in the USA is a lot like working at Foxconn in China building iPhones. If you don't like the working conditions and low pay (do you remember the 10 suicides in their plant a few years ago)...get out of line because there are ten desperate souls ready to take your place. Negotiate that!"

"Compared with what kind of money the company makes on a good invention, NO, engineers are not fairly paid. Many engineers put in countless hours of work to develop a patentable product, just to see a few hundred dollars in bonus. It would be fairer to be paid a percentage of the profit. Let's say 0.25-1%."

"It would be great if design engineers were compensated in cash and % royalties on each patent."

"Just getting your salary isn't proper compensation for creating IP. This isn't just an issue in the medical industry, most engineers are not properly compensated for the IP they create for the company while the CEO's and other executives reap the financial benefits of their work."

"Executives and salespeople are paid very well for their performance, but the engineer creates the next hot device that brings in billions, his pay never changes. No engineers, no hot new device."

"Not all IP gets implemented in products.... But when it does and the company makes millions and the product has a reliable track record (a homerun). The engineer/team of engineers should get some type of compensation beyond the standard IP award and company incentive program... this currently does not happen at my medical device company."

"I have been an engineer in the med device market for 26 years and feel the compensation levels are not fair as the incentives given."

"It depends on the company, but some only pay out less than $500 dollars per patent total between the application and the approved patent. They review these patents as to whether or not they will make money in their portfolio, and whether they make a real product, or use the portfolio to keep their competitors at bay, they make a lot of money of the total patent, unless it's a fledgling start-up in a garage."

"We are in a country where overall the IP is not highly compensated, it is well paid but I do not think it is enough."

"More to the point is that the high-level CEOs and executives are obscenely overpaid, taking credit for hard earned engineering results."

"I am currently developing a new device that the company I work for will market and realises the profit from for many years to come. I am due to retire in the near future so will see little or no return for the IP I have invested. This I believe crystallises the problem, the company sees this as their IP but the ideas experience and knowledge is from an individual who will rarely see a continuing return for their efforts."

"We work in a high-tech industry, but receive old-industry pay."

"Many engineers create new products and are not compensated for their effort. Many of these ideas are worked on during their off hours as the mind does not shut-off."

"Is an engineer paid to engineer or find ways to generate IP? IP to a company is an added bonus and is sometimes not expected. IP can generate revenue but it is also protection from the competition. Since it is not within an engineer's job description to generate IP, when IP is generated there should be fair compensation beyond just getting their name on a patent."

"We are paid a one-time only small payment, regardless of the money that the device brings into the company. There should also be a bonus-plan based on the overall gross profit the company makes from the device."

"As the progenitors of a technology, as researchers we are rarely there at the end of sale point which people tend to remember more. Unfortunately reading off of an info card as a salesperson means you get compensated. Interesting that these marketers are classed as creative when most of it is handed on a platter for them to regurgitate."

"Generating IP is an intellectual process that requires more than just working hours. Having ideas and/or finding solutions to problems happen at the weirdest times. Sometimes that may also happen during working hours but usually, working hours are not creative hours. Creativity is what generates IP and, therefore, should be honoured generously. Honoured and not cheated to the bare minimum!! Then nobody would dream of cheating on one's employer. How about generating loyalty and trust by better compensation for good ideas leading to IP? However, that might be a too novel concept."

"Generally, all design engineers are poorly paid, especially in the UK."

"If your day job is to invent, i.e. R&D, then you are paid for your IP every day. Many companies have added reward systems for patent production, which tends to be small overall. Some companies later will reward employees for notable patents with grants of stock or options. The bottom line is that if you want to 'own' your own IP, then you should go be an independent entrepreneur."

"Inventors (medical device engineers) are usually given a small amount of money (few hundred to a couple thousand dollars) towards the ideas, when a patent application is created or patent received, which the company they work for will make millions or billions of revenue on. Some sort of profit sharing for the product over its commercial lifespan, or patent enforcement timeframe would be fairer, regardless of maintaining employment. Some will say that the engineer developed it with the company resources, on their time, for them, etc. That is partly true, but usually, these ideas are also worked on after work, in their free time because it is the inventor's passion. If they had just done their normal work on projects, and not developed their idea for the company which they had, the company would likely not have received the increased profit or revenue for the invention. The company acts as an early investor which will receive a great reward if the idea takes off to commercialization. The inventors/engineers who bring the ideas to fruition should receive a greater reward so long as the product it produces is viable, potentially in the form of a (small) percent of the revenue. This would lead to more meaningful IP coming out of the engineers who will hold a stake in the potential commercialization of their ideas. The company will still choose to pursue IP or not, but even if not, there will be more meaningful ideas put forth to be commercialized due to the potential return for the inventor."

"Your salary is compensation to your IP work and as an employee, you relinquish your IP rights to the company. Also, you used company resources to develop the IP, so it makes sense that the company should own it."

"The Company pays not only 'daily salaries' but also entire work and development costs of the work on a project."

A multi-paragraph response from one reader:

"1) We agree to these terms in our employment contract. If you don't agree, then self-fund your research, development, and IP protection. (Note: you will not have the infrastructure/technical resources of a company to assist your IP development and protection).

"2) Engineers are well compensated for work they enjoy. If you feel you are not compensated enough, do not enjoy your work, or are not recognized for your work, you are a free agent to move companies or industries. If you want compensation for your ideas, then you should self-fund, raise money, or find an academic position where you are able to take more of the profit from a patent (assuming any of your patents return a profit - and in a reasonable time-frame).

"3) Individuals do not often appreciate the cost, effort, and risk of IP development. Cost not just to invent/document - but to file, get approval, and then maintain the IP over its lifetime. This is a large sum of money and significant risk (of not getting a return on investment) for a company. One profitable patent must pay for all those that were not profitable - and this is only known much, much later in the IP lifetime.

"I have many patents to my name. I am proud of them. Some cases I was directly compensated (University paid me a portion of the royalties - and footed the bill for the cost of IP development/protection/marketing), in most cases I was not compensated directly - (other than a nice plaque) but my promotions and pay raises reflected by contributions. I am more than happy to have the company finance the cost and headache of IP filing/maintenance/protection - so I can go back to my sandbox (lab) and play some more."