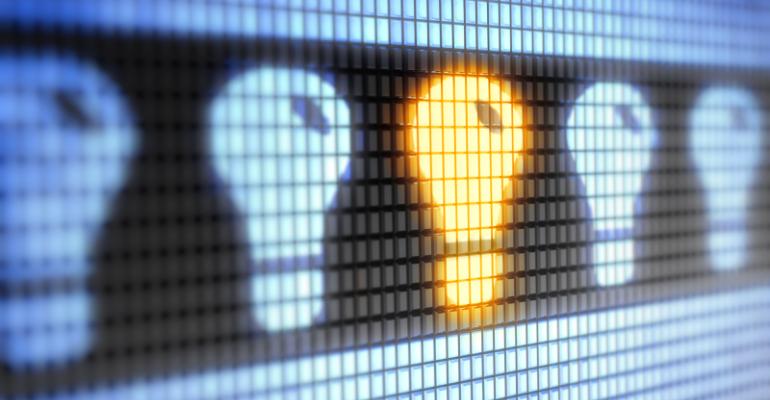 Innovation is not some elusive chimera. Companies can implement these strategies to create a sustainable pipeline of innovation for the future. 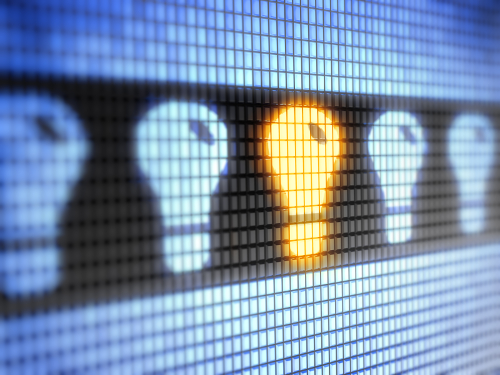 The mythological Greek character carrying the planet on his shoulders has shrugged. And the world of healthcare, with all its old assumptions, is coming crashing down. Nowhere is this fundamental shift being felt more closely than in the medical device world, where innovation, to a large extent, has often meant tweaking an existing product and charging a premium for it. And now the end user of the device - physician - no longer has the preeminent position he or she once did in purchasing decisions at hospitals.

In the new world, companies need to prove their device has economic and clinical benefits to a wide ranging group of actors.That requires disrupting how innovation has been done previously in order to build a new model of an innovation pipeline that can be sustained well into the future.

And that is precisely the subject of a keynote presentation that Scott Bruder, vice president, chief medical and scientific officer at Stryker, will give June 9, at the MD&M East Conference & Exposition in New York City.

In a recent interview, he shared a few strategies for building a sustainable pipeline of innovation. Here are three specific ones inferred from the discussion:

Move Beyond Product Offering
There are 10 distinct types of innovation levers that need to be pulled with care to build a game-changing product/solution, according to a book that resulted from analysis at Doblin, the innovation consulting group within Deloitte.

It’s not just about the product being sold. In fact, focusing on product alone will mean a failure to innovate, authors of the book say.

Drawing from the book Ten Types of Innovation: The Discipline of Building Breakthroughs, Bruder provides this infographic from his presentation that shows how some companies have found success by pulling at those different levers: 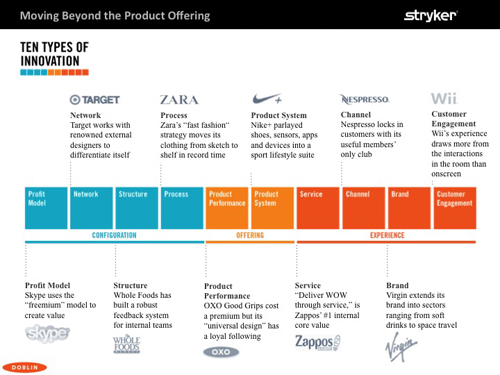 Get Over the “Not Invented Here” Syndrome
Device makers need to realize that collaborations and partnerships are key to developing and commercializing products that will be successful in the marketplace.

“As an industry, we need to make sure that we are collectively looking to the outside - to key strategic partnerships with universities who have technology that is complementary to the core technology that your company is interested in,” Bruder advises. “Rather than just thinking you can do it all, people have to get over the 'not invented here' syndrome."

Bruder’s personal experience at Stryker has helped to shape this strategy. He noted how he often gets “random invention disclosures” from universities and neither they have the slightest notion of what Bruder and Stryker would be interested in, nor does Bruder have a good understanding of where they are coming from.

“You’ll want to look to universities who are strong in those areas you are interested in, and try to build partnerships either directly with the technology transfer office or with the academic investigators who have the specific expertise you need,” Bruder said. “There, you can support fundamental work in their laboratory or you can fund focused work that will address a specific question that you both have.”

Make Sure You Have Products In Adjacencies

It's simply not enough to use existing products and assets to serve existing customers in existing markets. It's important to get out of that comfort zone and move into adjacencies. Here's a slide that Bruder uses to illustrate his point. 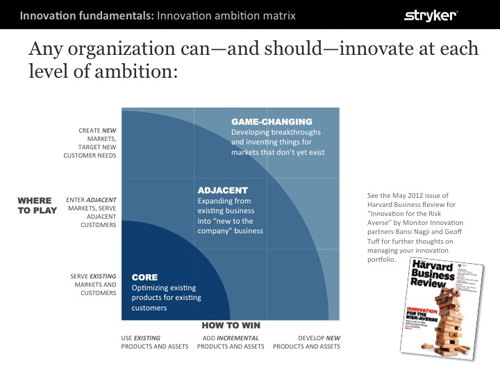 And it's also important to have investment in technologies that are game-changers because they can lead to products that have new technologies and serve totally new markets.

Live By Comparative Effectiveness Data
The previous selling model in the device world was largely relationship based between hordes of sales reps and physician end-users. Now the focus is on whether the device/technology will can help hospitals check two boxes:

Answering those questions necessarily means engaging in comparative effectiveness research, the value of which is being belatedly felt in the healthcare and device sector.

“There is finally a true appreciation for the requirement to generate sufficient proof sources based on both clinical and health economic data that didn’t previously exist, mainly because it wasn’t necessary to drive broad adoption …,” Bruder noted.

He added that one of his responsibilities within Stryker is to “help elevate our sophistication and capability around the generation and dissemination of clinical and health economic evidence.”