HomeBusiness15 Agents of Change in Medtech: No. 2 Illumina
Recent
Feds Crack Down on Reused Rectal Probes
May 18, 2022
Paige Wins CE-IVD & UKCA Marks for AI that Detects 4 Prostate Cancer Biomarkers
May 18, 2022
Europe’s Largest Commercial Lab Building to Be Built at Canary Wharf
May 18, 2022
Stryker Is Smart to Pursue This Type of Reimbursement
May 18, 2022

Medtronic Wants to Ease Your Pain with Closed-Loop Implantable
May 17, 2022
An At-Home Collection Device for Diabetes Risk Testing
May 17, 2022
MannKind Acquires Wearable Insulin Device from Zealand Pharma
May 17, 2022
Movano Wants to Put a Ring on It
May 17, 2022

15 Agents of Change in Medtech: No. 2 Illumina

No. 2: Illumina Genome sequencing is the holy grail of healthcare technology. With the promise of everything from disease screening, enhanced gene therapy, genetic screening of infants, customized medications and implants, and even just learning fun facts about our ancestry, proponents have hailed genome sequencing’s potential to change every aspect of healthcare. 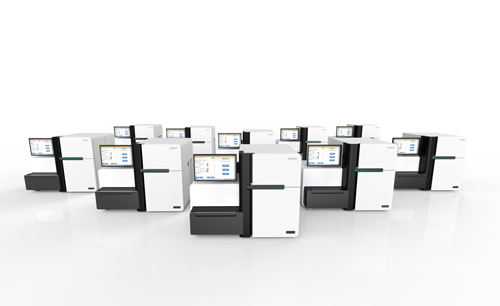 The problem, until recently, was that sequencing was just too expensive for both researchers and consumers. The company that could provide affordable genome sequencing could do for healthcare what Google has done for the Internet.
Perhaps that company is San Diego-based Illumina, which has broken the sound barrier of human genomics with its HiSeq X Ten Sequencing System. The system, which first shipped in the first quarter of 2014, can sequence a human genome at the unheard of price point of $1000, including the cost of machines, chemicals, and preparation.

The company says the HiSeq X Ten System is ideal for population-scale projects focused on the discovery of genotypic variation to understand and improve human health. For the first time researchers will be able to analyze genomic information from large sample populations at an affordable price. Coupled with its analysis technology (including an iPad app), Illumina's DNA sequencing systems have captured the company more than 70% of the genome sequencing market and placed the startup, which had only 25 employees at it inception, at the head of the pack of companies leading the next generation of healthcare technology.