Among the world's largest medical device companies, these 10 had the worst stock performance during the first six months of 2016. 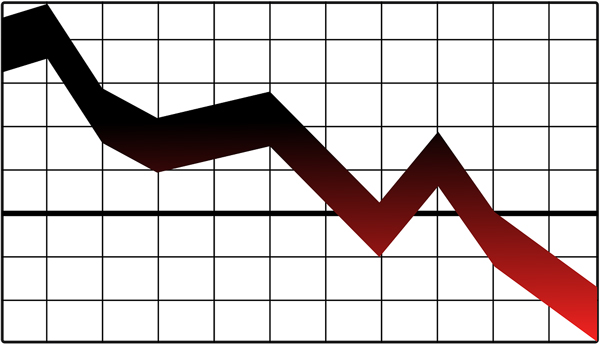 The United States almost seems as though it is an oasis of economic growth in the present economic environment, and the present list of worst-performing medical device companies seems to reflect that. (Download Qmed's full spreadsheet of the 89 stocks.)

Only one of the five worst-performing companies, Integer Holdings (formly Greatbatch), is from the United States.

Here are the medical device companies with the worst-performing stocks year-to-date, as of June 30:

The Brussels, Belgium exchange that the Belgian multinational trades on was down nearly 5% overall for the first six months of 2016 amid the continued shakiness of the European Union's economy--not to mention questions around its overall viability. Agfa-Gevaert appears to have been especially hard-hit in this environment. For the first quarter of 2016, revenue was down about 3% year-over-year, and profit was down 1%. Company officials, though, point out strong performance among the company's growth engines, including Agfa-Gevaert HealthCare's Direct Radiography and IT businesses. Efforts touted by the company include its joining of IBM's Watson Health medical imaging collaborative, which seeks to bring cognitive imaging into daily practice.

Greatbatch changed its name to Integer Holdings, trading under the New York Stock Exchange ticker of ITGR starting July 1. But it is only up more than $2 per share since the change. The medical device outsourcer reported adjusted earnings of 34 cents per share during its first quarter of 2016, down 47.7% from the same quarter a year ago, according to Zacks Equity Research. One positive note, according to CEO Thomas Hook, is that cardiac rhythm management headwinds are being offset by growth in neuromodulation medical device revenue.

Revenue has been growing in recent years for Hitachi. But the Japanese multinational's profits of about 295 billion yen for the fiscal year ended March 31 was only a little over half what it was two years before. Japan's economy has been recovering at a slower pace, and China's economic slowdown has had negative effects, according to Hitachi. The company's healthcare business, however, actually saw higher earnings, reflecting the effects of business restructuring.

Shinva, a major Chinese maker of medical equipment founded in 1943, could see its stock performance decline exacerbated by the major correction taking place in Chinese stock markets. The Shanghai Stock Exchange A Share Index, for example, is down 14% so far this year.

The Japanese multinational--which among other things makes dialysis machines and continuous renal replacement therapy devices--also appears to be affected by the Japanese economy's slow pace of recovery. The company recently said that dialysis medical institutions in Japan continue to face a tough environment due to a slowdown in the number of dialysis patients in the country. But the company also noted that the number of dialysis patients is increasing globally. So it anticipates continued growing demand.

[Image courtesy of Clker-Free-Vector-Images on Pixabay]