2. Making The Leap From App to Medical Device The Food and Drug Administration has been regulating mhealth apps if they function as a medical device and so far 100 products have been approved, the report states. While all mhealth apps do not need to be regulated and some should stay in the consumer realm, there are others that might benefit from an FDA stamp of approval.

Even among consumers, 20% of respondents to an HRI consumer survey said FDA approval was very important in their decisions to use a mobile app. Not surprisingly, a greater share of clinicians - 26% - responded that FDA approval was most important when deciding to prescribe apps.

"We believe it's helpful to think of apps like drugs. Just like in a local drug store, we need an "Apps Pharmacy" with tiered levels of certification/regulation and process for physicians to recommend or even prescribe apps," said William Falk, North & South America Healthcare Leader, PwC, in an email.

But it will take a larger and sustained effort to bring mhealth apps and digital health devices into common clinical practice. The needle is moving however -  90% of MDs in the HRI survey said such mhealth apps and devices will be important to their practices over the next five years. 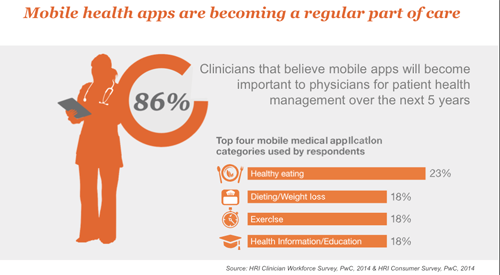