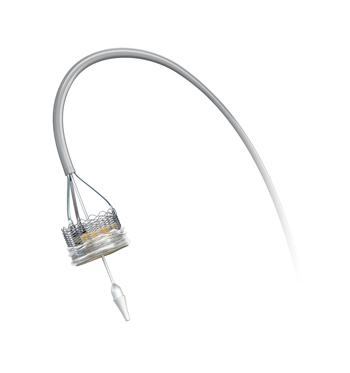 The Lotus Edge is indicated in Europe for use in patients with severe aortic stenosis who are considered at high risk for surgical valve replacement. The plan is for the Lotus Edge to be used in select centers in Europe, with commercial site expansion accelerated as physicians become fully trained.

The Edge's advantage over the previous Lotus valve system include  a more flexibl catheter with a lower profile, designed to improve ease of use and accommodate the patient's anatomy. The Edge also includes the Depth Guard design element meant to reduce the need for a permanent pacemaker by further limiting valve interaction with the conduction system of the heart during deployment.

"The Lotus Edge valve system is designed to give physicians increased control during implantation, which can help provide a more precise, predictable procedure to ensure the best patient outcomes," Kevin Ballinger, president of interventional cardiology at Boston Scientific, said in a news release.

The original Lotus valve system received CE Mark in 2013. Boston Sci has touted its unique design that resembles a Chinese finger trap, even though it is made of nitinol instead of fiber. The design enables the Lotus to be collapsible, elongated, and very flexible, greatly improving control during implantation.

The valve received its CE Mark nearly three years ago. But it remains an investigational device in the United States, where Edwards Lifesciences and Medtronic are the dominant players, as well as Japan.

The Lotus valve system recently ran into some recall troubles in Europe, with Boston Sci pulling any valves made before March 2016 that had not been implanted already. There were no safety concerns for patients who already had the valve implanted. Rather, the recall involved the release mandrel breaks in the valves' delivery systems. The delivery system problem caused health providers to resheath and remove the device, prolonging the implant procedure. There were three deaths caused by catastrophic vessel trauma.

Starting in March, Boston Sci made a component change to correct the problem.