Are You Ready for the Factory of the Future? 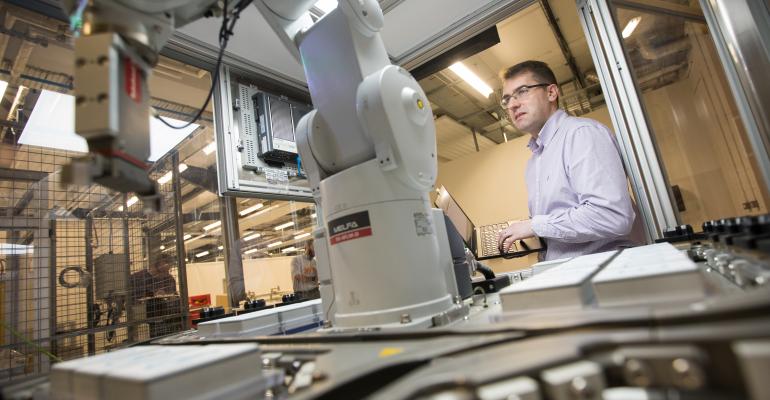 A controls engineer is programming a robot at Modular Automation’s facility in Shannon, County Clare, Ireland. Image courtesy of Modular Automation.
Industry 4.0 is not just a fad—it is a real event, said an expert at The Medtech Conference.

There’s a lot of data tied up in medical device manufacturing processes—but it’s been challenging to capture and process this information from historically independent and disjointed machines and processes, say experts. In addition, skilled operators with a deep understanding of such processes have often served as the keepers of the knowledge.

Connecting those processes and machines so that they can communicate with each other and then collecting and analyzing the data from those processes could yield several benefits. Such connected, highly automated environments—often called smart factories, smart or advanced manufacturing, or Industry 4.0—offer opportunities for process improvements, improved quality, reduced costs, faster fulfillment, and more, said experts at The Medtech Conference by AdvaMed. Speakers explored how medical device manufacturing could be transformed through smart manufacturing in the panel discussion, “International Perspectives on Industry 4.0 and the Medtech Factory of the Future.” Moderated by Seamus Carroll, vice president, medical technologies division, IDA Ireland, the panel included Vivian Farrell, CEO of Modular Automation; Dan Grant, CEO of MTP Connect, based in Australia; Colm Hynes, director of engineering, science, and technology, joint reconstruction, DePuy Synthes, Johnson & Johnson; and Toby Sainsbury, technologist, industrial technologies group, IDA Ireland.

“Once you begin to connect devices, you gain the ability to predict what will happen,” Hynes told the audience. “You can continuously learn as time goes on. You can find patterns and see how the process behaves. You can reduce the cost of quality, and asset utilization goes up.”

It is possible to “connect all the different elements from order entry to component delivery,” added Hynes.

Smart factories “leverage the latest automation technologies to optimize the manufacturing process," Farrell later told MD+DI. "This often results in industrial robots interacting with people to get the task done."

Modular Automation has worked closely with J&J to implement such an approach. “It is very much a partnership—our team working hand in hand with Colin’s team. We’ve shared information and learned from each other, all raising the bar to identify better solutions,” said Farrell. “We allow the flow of data from machines to a central location to be analyzed and identify trends. The goal is to make medical devices faster and safer and more aligned with patient needs, and we all manage risks as we go forward.”

For more on smart manufacturing, attend the Smart Manufacturing Innovation Summit February 6-7 held during MD&M West in Anaheim. Sessions include "Build These First: Digital Table Stakes for Your Industry 4.0 Transformation," and "Digital Transformers: Real Examples of How First-Movers Are Innovating Manufacturing," and more.

“There’s more productivity in how you produce products and get to patients,” added Hynes. “We build in batches, and [Industry 4.0] allows us to be a single-batch production and reduce inventory.” Such an approach allows manufacturers to produce personalized, patient-specific products, he added. “Speed, agility, etc. are achieved by adoption of information to create improved landscape in manufacturing.”

There’s a “need to arrive at solutions quickly,” added Farrell. She offered the example of high-speed contact lens manufacturing. “To double the output with half the footprint, you can’t achieve that with old thinking. You need to identify new ways to work. [It involves] machines and people working together to deliver products quicker and safer, while reducing waste and improving overall quality.” 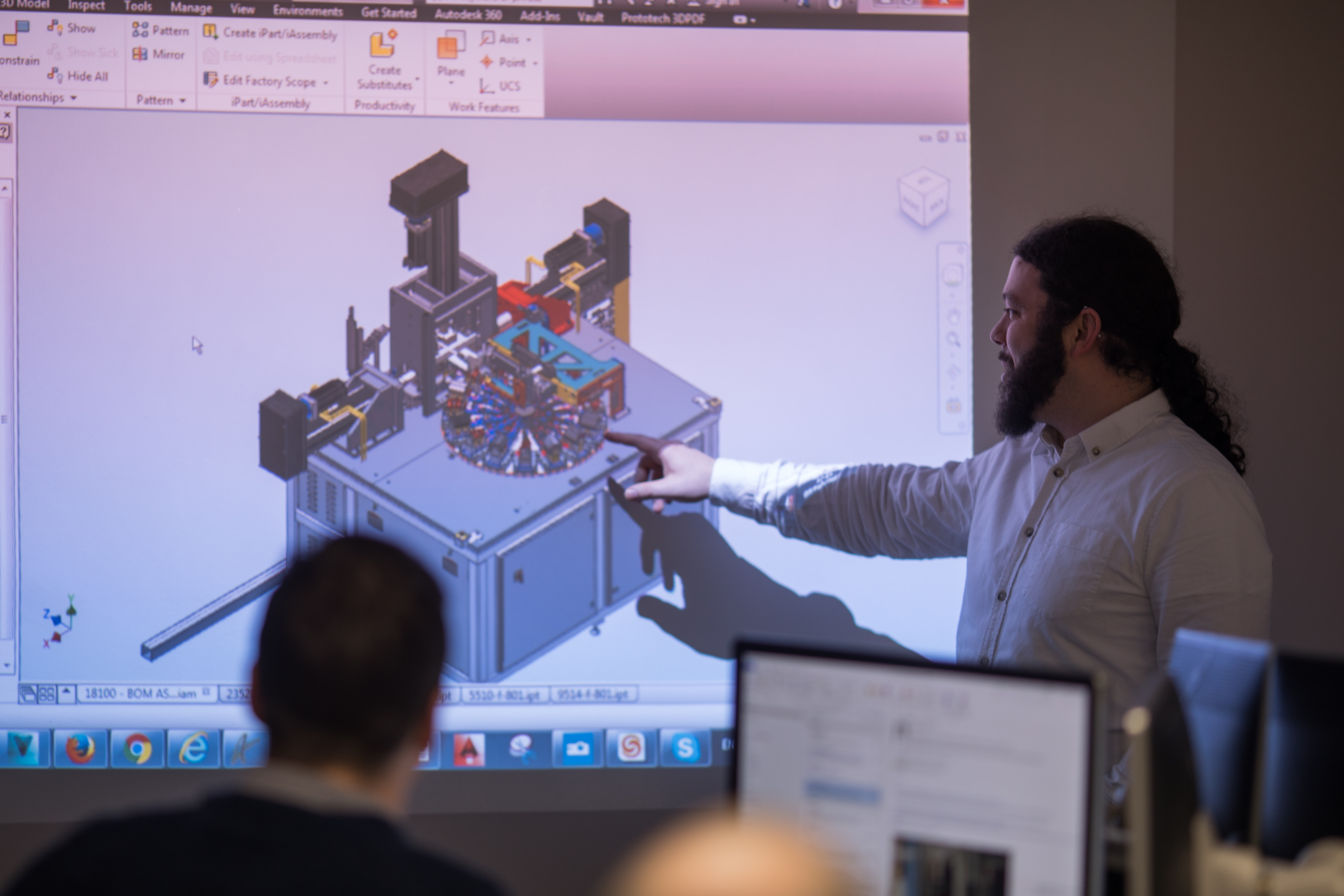 Above: A mechanical design department manager leads a team meeting to discuss a concept for a bespoke automation solution. Image courtesy of Modular Automation.

Sainsbury told the audience that companies can “derisk in research and development innovation centers in a collaborative environment.” IDA Ireland works to support such exploration while remaining technology agnostic, he said.

Grant said that Australia recognized the importance of Industry 4.0 in 2016 and set up a task force. “We recognized the need to ensure appropriate standards,” he said. “We developed test labs at universities and research labs with links to industry.”

Companies need to evolve, too. “We as an organization have been fortunate enough to create an operations technology group to develop and test and learn. It is important to have the processes and structure to be able to do so,” said Hynes. “Otherwise, it is difficult in a regulated environment. You need the appropriate control system and software that can be validated and managed.”

Companies are also facing the challenge of adding new technologies in a regulated environment, such as augmented or virtual reality, said Farrell. She advises adopting technologies in “bite-sized chunks in a way that is proven safe and mitigates the risk.”

Another key challenge of this evolving manufacturing environment is “developing the workforce of the future,” said Farrell, namely the “makeup of teams and skills needed for the future.”

Sainsbury said the educational system in Ireland is responding. “Universities are offering programs in AI, cybersecurity, autonomous vehicles, and cloud computing,” he said. “As a state we have created funding, fellowships, feasibility studies, and full R&D programs.”

He added that he’s seeing “convergence of biopharma and medical with software, IT, and cybersecurity. Skills around data analytics, but data is one thing. We need security to protect the flow in and out of the data.” Cybersecurity is important for the industry as medtech becomes more mobile and consumerized, he added.

When asked what skills are being sought, Hynes said that “requirements have moved from data scientists” and more toward skills that center around getting the data and “transforming it for decision making.” He said that companies are looking for “curious, determined, adventurous people. . . . We need to allow people to test and learn and fail fast. The industry needs to be conservative from a production and manufacturing perspective but also be adventurous in a separate entity to be able to source an idea, develop a proof of concept, test it, and dump it or keep it. Such a ‘safe environment’ generates huge value. Creating that structure is the biggest step forward.”

Grant added that “STEM is shifting to STEAM so we have the arts in there, for commercialization skills and entrepreneurial skills.”

Seamus asked the panel whether robotics would have an effect on jobs.

“There is a big concern about job loss, but there will be job creation,” Grant said. He offered the example of autonomous dump trucks moving ore in mines. “Dump truck drivers lost jobs, but jobs were created in a call center.”

Carroll summed up the discussion this way: “Industry 4.0 is happening rapidly and is not just a fad—it is a real event. There are tremendous implications for companies and for the skills that people will need to have. In countries like Ireland, for example, there is a lot of practical and financial support, and they’re not alone—there are world-class companies to help them execute."

Industry Voices: The State of Automation? A Rough Year has Opened the Floodgates
Aug 09, 2021