They Dropped Out of Harvard, Now Their Digital Therapeutics Company is Backed by Sesame Street 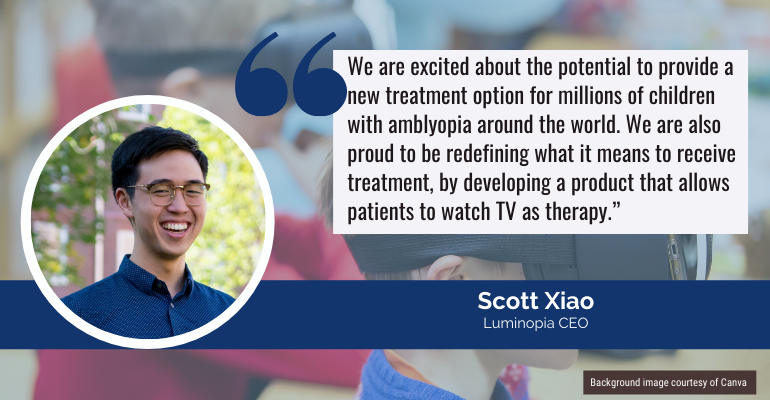 Luminopia has already landed huge partnership deals for its digital therapeutic technology, including an investment from the venture arm of Sesame Street.

Scott Xiao and Dean Travers were freshman at Harvard when a computer science project put them on a path to leave the ivy league, and start their own digital therapeutics company.

Luminopia, the company Xiao and Travers founded in 2015, is now fueled by some powerful partnerships, and is on track to bring to market a virtual reality software application to treat amblyopia, better known as lazy eye. The real genius of the technology is that it asks children with the condition to do something they actually want to do — watch television shows and movies.

With Luminopia One, patients watch visually modified shows and movies as treatment. Therapeutic algorithms are applied in real-time to patient-selected video content to promote weaker eye usage and encourage patients’ brains to combine input from both eyes, and treatment is delivered using commercially available VR headsets. FDA is currently reviewing Luminopia One via the de novo pathway, and if approved, it would be the first digital therapeutic approved for a neuro-visual disorder.

Xiao, now CEO at Luminopia, told MD+DI that the idea for Luminopia One, came from talking to a fellow classmate at Harvard about his struggles as a child with lazy eye therapies. They discovered that their classmate was not alone in his experiences with lazy eye therapies, which typically include wearing a patch over the strong eye in an effort to strengthen the weak eye, as well as the use of atropine eye drops — the same kind of drops used to dilate pupils before an eye exam.

"We started looking at digital technology as a way to deliver treatments in a more engaging and targeted manner and developed an early prototype of this idea as part of a computer science class that we were in at the time, and reached out to some folks at Boston Children's Hospital," Xiao said.

"We were really blown away by his reaction," he said.

Hunter told Xiao and that the biggest problem he deals with on a daily basis as a clinician is trying to get patients and their parents to comply with the prescribed therapy, such as the eye patch and the atropine drops.

Hunter now serves as a scientific advisor to the Cambridge, MA-based company. Boston Children's Hospital is also one of the company's innovation partners, along with the Johns Hopkins Wilmer Eye Institute, Children's Hospital of Philadelphia, and the Picower Institute for Learning and Memory at the Massachusetts Institute of Technology (MIT).

Luminopia just emerged from stealth mode with the publication of phase 3 pivotal data in Ophthalmology, the journal of the American Academy of Ophthalmology. The clinical trial represents the first successful randomized controlled trial of a new treatment for lazy eye in more than a decade.

Not only are kids and parents more likely to comply with a solution like the Luminopia One compared to the use of an eye patch and eye drops, but most current therapies for lazy eye are monocular solutions designed to only target one eye, Xiao explained.

"They penalize the stronger eye and hope that that's enough to get your weaker eye to become stronger, but they don't actually teach patients how to take input from both eyes," he said.

The Luminopia One, on the other hand, is designed to encourage patients to combine input from both eyes to view the whole image.

"It's that new mechanism that also makes us believe that we will see better long-term retention of benefits," Xiao said. 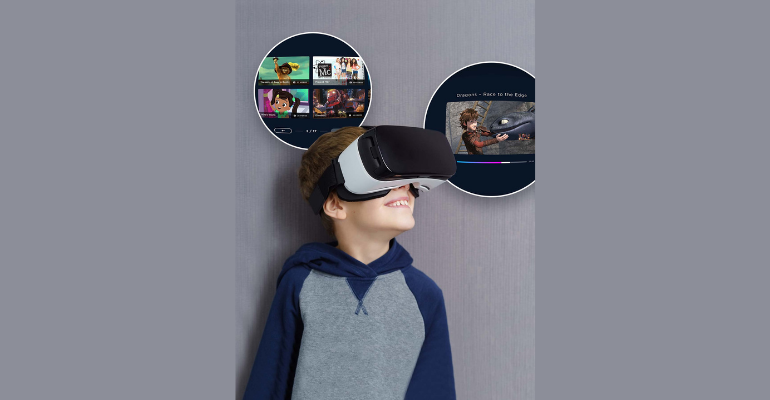 Luminopia has also partnered with leading media companies to offer popular, engaging, and educational content for children, from familiar names like Sesame Workshop (the creators of Sesame Street) and Nelvana through its VR software application. If approved by FDA, Luminopia One will be prescribed by an eye care professional for one hour a day, six days a week, for 12 weeks. Continued treatment may be prescribed depending on an individual patient’s response to treatment.

Xiao said that when the company approached Sesame Workshop about using its existing content and repurposing it in Luminopia One to treat children with amblyopia, Sesame not only said yes, but also saw it as an investment opportunity for its venture capital arm, Sesame Ventures.

In the pivotal study, children who received Luminopia One plus glasses (the treatment group), experienced a statistically significant improvement in Best Corrected Visual Acuity (BCVA; the primary endpoint) compared to those who wore glasses alone (the control group).

Participants were recruited at 21 U.S. academic and community sites, including the Cleveland Clinic, UCLA Jules Stein Eye Institute, Duke Eye Center, Ann & Robert H. Lurie Children’s Hospital of Chicago, Texas Children’s Hospital, and Children’s Hospital of Philadelphia. A total of 105 patients were enrolled in the study—51 were randomized to the treatment group and 54 to the control group. An interim analysis was planned and conducted after 105 participants had completed the primary endpoint visit at 12 weeks. At the interim analysis, the difference between groups in weak eye BCVA improvement was significant (1.0-line, p=0.0011, 96.14% CI: 0.33-1.63 lines). No serious adverse events were reported.

The study also evaluated adherence and patient satisfaction, as these are challenges with current amblyopia treatments. The median adherence for Luminopia One in the study was 88%, substantially higher than studies have shown for patching. Patient satisfaction was evaluated using the Net Promoter Score (NPS) metric, and Luminopia One’s NPS was +65, comparable to popular consumer products like the iPhone.

A link to the publication, “Randomized Controlled Trial of a Dichoptic Digital Therapeutic for Amblyopia,” can be found here: https://www.aaojournal.org/article/S0161-6420(21)00682-5/fulltext.

Digital therapeutics as a new class of treatment

As MD+DI has previously reported, the digital therapeutics market has gone absolutely gang busters this year.

With so much activity happening as of late in the digital therapeutics market, here is a summary of just some of the recent developments in the space: