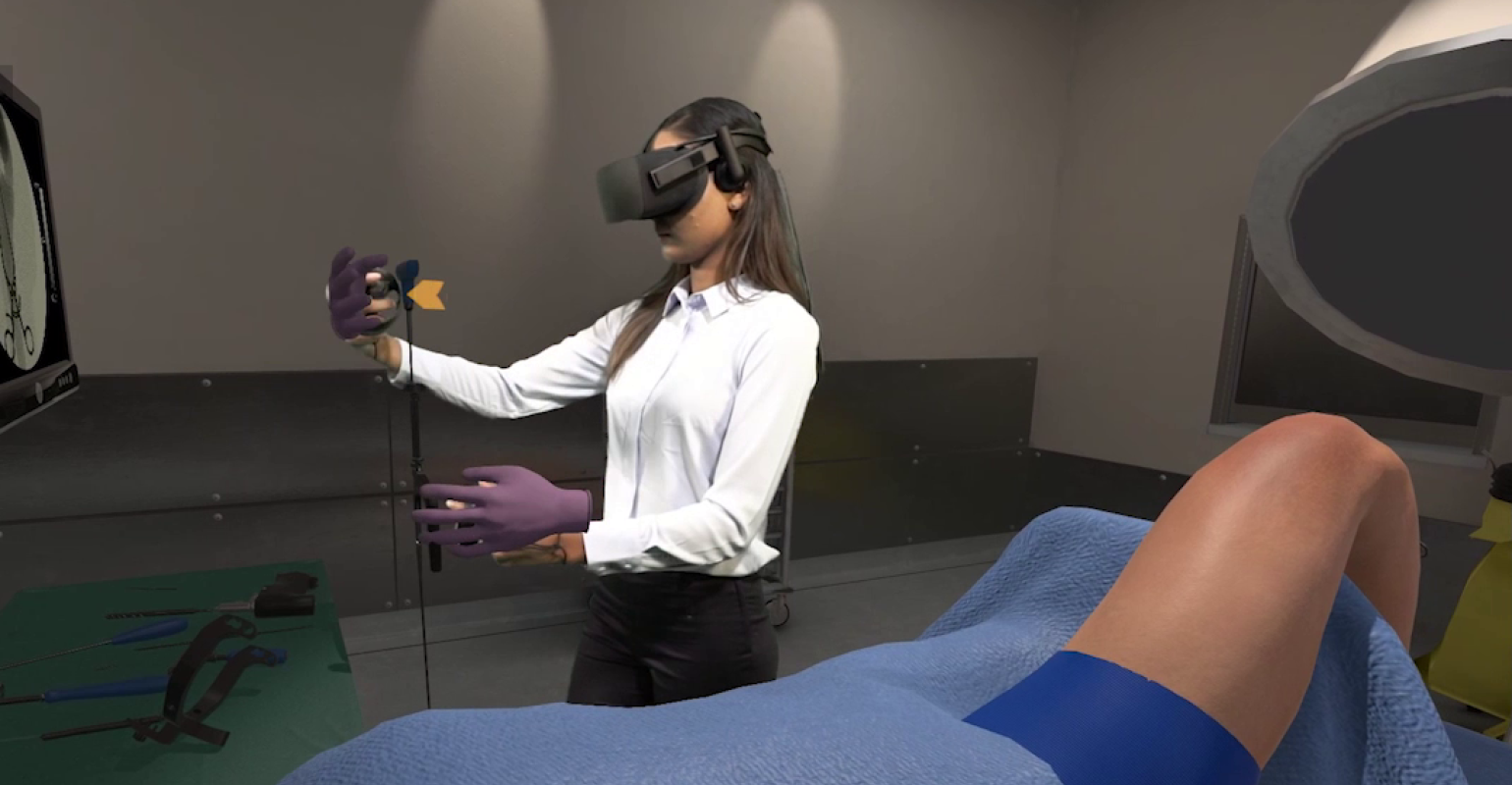 Virtual reality surgical training solution Osso VR is already impacting reality. A just-released study conducted by UCLA’s David Geffen School of Medicine shows that the surgical performance of Osso VR users “improved by 230% and their speed was 20% faster,” Justin Barad, MD, CEO and co-founder of Osso VR, told MD+DI. “These are not subtle differences. Research is showing that VR users are faster and more competent.” He added that just after 30 minutes of VR training, the “effect is startling.”

“The reception has been great,” Barad said. “Three things have happened for such rapid change—[healthcare] problems are so bad, people are desperate. Solutions are so good. And today, people are comfortable with technology. There are some great ideas, but how are we going to teach people? It’s that last mile of education that can help train people.”

Osso VR’s impact can be seen in the UCLA study, “Randomized, Controlled Trial of a Virtual Reality Tool to Teach Surgical Technique for Tibial Shaft Fracture Intramedullary Nailing.” Participants were randomized between a traditionally trained group and a group that underwent VR training to a specified level of proficiency. (Osso VR was the only VR training platform in the study, according to an Osso VR spokesperson.) Each participant then performed a tibial intramedullary nailing on a sawbones simulation, graded by a blinded observer, Osso VR shared in a news release on the study. VR users completed the tibial intramedullary nailing procedure an average of 20% faster than the traditionally trained group. Participants in the VR group completed 38% more steps correctly in the procedure-specific checklist compared with the SG group, which was statistically significant, it was reported. And as measured by the Global Assessment 5-Point Rating Scale, participants in the VR group received significantly higher ratings in all categories compared to the traditionally trained group with an overall improvement of 230% in total score for the VR trained group. (See chart below for more details.) 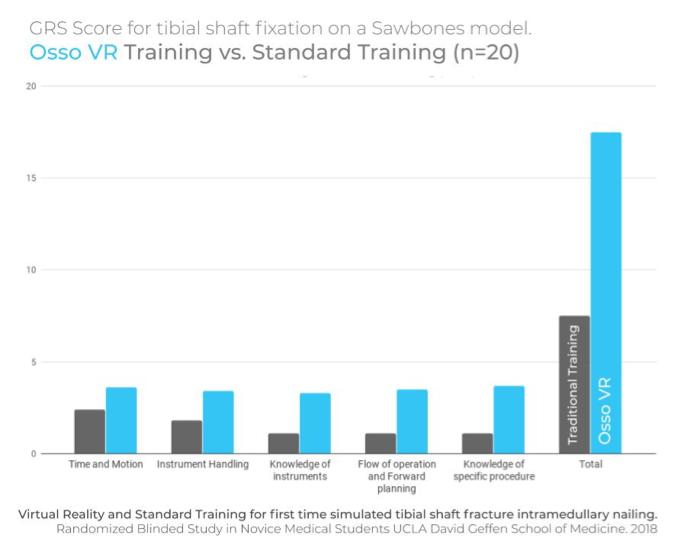 Barad says Osso VR makes training “easy and accessible” for surgical residents. Traditionally, “the only way to practice surgery has been on a patient or a cadaver. [Operating on] a patient is not ideal if you’re not ready, and cadaver labs are expensive,” he told MD+DI. As a result, “the system is starting to break down. Orthopedic surgery training is long—up to 14 years—and some residents require multiple fellowships to complete it.” When considering such training along with the extreme financial investment required and the decreased reimbursements throughout healthcare, these hurdles could lead to physician shortages as potential students turn away from such careers, he added.

Osso VR training, however, could offer a few remedies. First, it could ease training. “An Oculus Quest fits in a knapsack and is portable, so it can be used anywhere,” he said.

It also provides a means of assessing readiness for surgery. “We haven’t had a way to assess surgeons, which is a huge problem for patients. Our technology offers an objective assessment of skills, efficiency, and accuracy,” he said. “If we’re able to train people more efficiently, and we have the means of assessing their ability, we’ll see changes in our residency programs and more consistent care.” Progress has already begun, given the number of resident hospitals using Osso VR as part of their curriculum, as mentioned earlier.

To ensure a user-friendly training experience, Barad says his team is continually enhancing Osso VR software. “Through SBIR-funded research, we analyze motion data from our users, and we feed it into AI to compare the motion sets to those of experts,” he explains. “In the early phase of VR training, it is important to maintain quality and clinical accuracy. It should ‘feel right.’ Trust is critical with any early technology, and user feedback is so important.”

The company uses a “no coding” toolset, which allows developers to “build high-quality VR training on a massive scale,” he adds. “With a scalable platform, we can grow very quickly.”

Users can download updates to products and procedures from the cloud “seamlessly,” he added. “New content is always being added.”

Such responsiveness to technology updates could benefit medical device manufacturers. “Our technology is only getting better to represent their vision and techniques,” he said. “We are their typewriter and they are writing their stories through us.”

He adds that smaller companies could “suddenly have a global reach through the training of thousands of surgeons.” 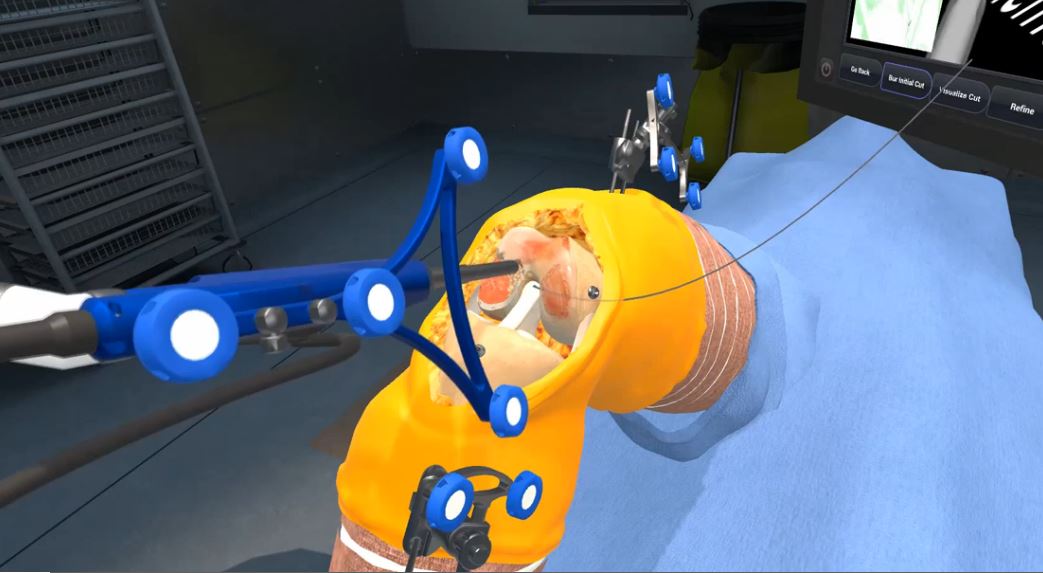 Osso VR could also help launch groundbreaking technologies that at first may be difficult for potential users to evaluate, such as robotics, navigation technologies, or patient-specific implants. “When you introduce a technology so drastically different, it is hard for users to see the value. Our technology shows the technology’s potential and highlights how to use it correctly to maximize benefits to patients. It could help speed up patient access to these new technologies.”

For instance, “working with Smith & Nephew was fantastic. NAVIO is a really incredible device that could standardize outcomes and decrease outliers. But it felt different to users, so they wouldn’t try it. And shipping the device to events was difficult because it is bulky,” he recounts. With Osso VR training, “they just need to ship VR headsets—it’s much more scalable. We are already seeing usage of Osso VR and Navio all over the world. Users know the steps to use it, and when they do use the real thing, they know what to expect, and they are excited to see how it compares.

“You can have the greatest system, but if people don’t use it, you’re not going to get the technology out there,” Barad said.

Barad says some potential customers have had some concerns about the “form factor” of VR controllers, which he acknowledges. But “when you’re in VR, you understand it. I say, “let’s try it out, and 95% of the time they’ll say, ‘I thought I understood it, until I tried it.’ It’s so impactful. And the experience of being in a VR space with someone else in another country unlocks the imagination.”

However, “all VR is not created equal,” he said. “We have 8 medical illustrators on our Osso VR team, so our quality is high and very intuitive.”

“This technology can drastically change the lives of our patients, and it is critical that we maximize access to the platform,” Barad had said in a July new release. “Patients today want the most valuable treatment, which often involves new and innovative medical technologies. Surgeons badly want to deliver for their patients, but might lack the tools that allow them to utilize these novel techniques. Osso VR augments the surgical team, giving them the proficiency and objective confidence that they can bring significant value to their patients using the highest value devices.“