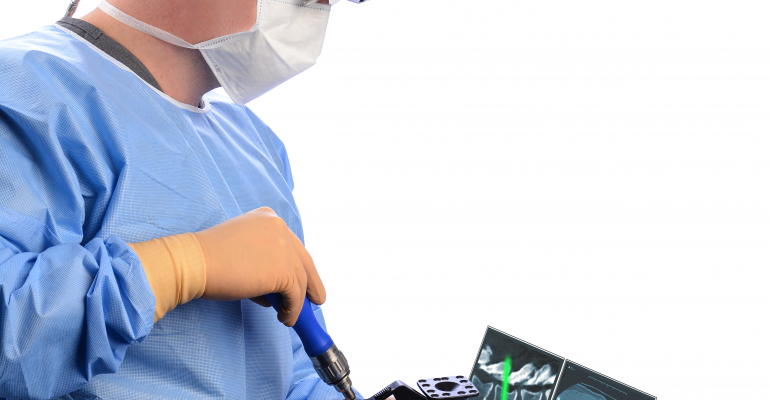 Courtesy of Augmedics
Augmedics has received a nod from FDA for the xvision Spine system. The Chicago, IL-based company's technology is an augmented reality guidance system to be used in spine surgery.

Augmedics is looking to strengthen and enhance a surgeon’s view during spine procedures. The Chicago, IL-based company has developed the xvision spine (XVS) technology, an augmented reality guidance system.

Augmedics said this is the first augmented reality guidance system to be used in surgery and that it has won FDA clearance for the device. Nissan Elimelech, founder and CEO of Augmedics said the company has also launched XVS.

“Our headset is comparable to the surgical navigation systems that all the [larger medtech] companies have such as the Medtronic StealthStation , the Stryker system, and the Brainlab system,” Elimelech told MD+DI. “[XVS] is a true surgical navigation or guidance that accurately tracks the surgical instruments, implants, and spine surgery. We do all this using a very small lightweight and very economic … headset.”

The xvision consists of a transparent near-eye-display headset and all elements of a traditional navigation system. It accurately determines the position of surgical tools, in real-time, and a virtual trajectory is then superimposed on the patient's CT data.

The 3D navigation data is then projected onto the surgeon’s retina using the headset, allowing him or her to simultaneously look at the patient and see the navigation data without averting his or her eyes to a remote screen during the procedure. The system is designed to revolutionize how surgery is done by giving the surgeon better control and visualization, which may lead to easier, faster, and safer surgeries.
Video Courtesy of Augmedics

xvision is now available for sale in the U.S., with headset distribution expected to begin in early 2020. Augmedics plans to explore additional surgical applications for XVS beyond spinal surgery.

“[XVS] is the first product out of many that we intend to work on and launch in the next few years,” Elimelech said. “We started with a spine product because we think there is the most need for a system like that. Most of the spine surgeons are not using any sort of guided-computer navigation.”

He added, “later we will work on other applications for brain surgery; joint reconstruction – knee and hip replacement; and trauma surgery. Basically, everything that requires high precision in treating a patient.”

Investors Are Lining up to Back This Digital Surgery Startup
Sep 30, 2021