A Disease-Sniffing Device That Rivals a Dog's Nose 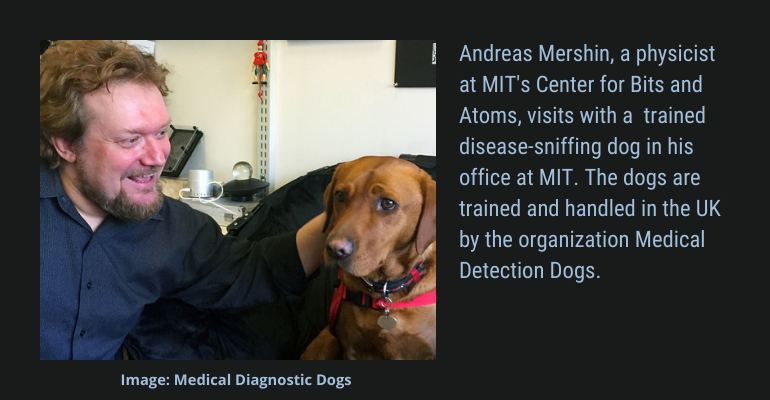 Trained dogs can detect cancer and other diseases through smell. Now, a miniaturized detector can analyze trace molecules to mimic the process

With training, dogs can smell cancer and other diseases, including COVID-19. Now, a team of researchers has developed a system that they say can detect the chemical and microbial content of an air sample with even greater sensitivity than a dog's nose. They coupled this to a machine-learning process designed to identify the distinctive characteristics of the disease-bearing samples.

The findings, which the researchers say could someday lead to an automated odor-detection system small enough to be incorporated into a cellphone, were recently published in the journal PLOS One, in a paper written by researchers from the UK-based organization Medical Detection Dogs, the Massachusetts Institute of Technology (MIT), Johns Hopkins University, the Prostate Cancer Foundation, and several other universities and organizations.

“Dogs, for now 15 years or so, have been shown to be the earliest, most accurate disease detectors for anything that we’ve ever tried,” said Andreas Mershin, a physicist at MIT's Center for Bits and Atoms, and one of the authors of the paper. “So far, many different types of cancer have been detected earlier by dogs than any other technology.”

According to Mershin, these dogs can identify cancers that "don’t have any identical biomolecular signatures in common, nothing in the odorants.”

Mershin and the team over the last few years have developed, and continued to improve on, a miniaturized detector system that incorporates mammalian olfactory receptors stabilized to act as sensors, whose data streams can be handled in real-time by a typical smartphone’s capabilities. He envisions a day when every phone will have a scent detector built in, just as cameras are now ubiquitous in phones. Such detectors, equipped with advanced algorithms developed through machine learning, could potentially pick up early signs of disease far sooner than typical screening regimes, he says — and could even warn of smoke or a gas leak as well.

The team recently tested 50 samples of urine from confirmed cases of prostate cancer and controls known to be free of the disease, using both dogs trained and handled by Medical Detection Dogs and the miniaturized detection system. They then applied a machine-learning program to tease out any similarities and differences between the samples that could help the sensor-based system to identify the disease. In testing the same samples, the artificial system was able to match the success rates of the dogs, with both methods scoring more than 70%.

Mershin said the miniaturized detection system is actually 200 times more sensitive than a dog’s nose in terms of being able to detect and identify tiny traces of different molecules, as confirmed through controlled tests mandated by the Defense Advanced Research Projects Agency (DARPA). But in terms of interpreting those molecules, Mershin said, “it’s 100% dumber.” That’s where the machine learning comes in, to try to find the elusive patterns that dogs can infer from the scent, but humans haven’t been able to grasp from a chemical analysis.

“The dogs don’t know any chemistry,” Mershin said. “They don’t see a list of molecules appear in their head. When you smell a cup of coffee, you don’t see a list of names and concentrations, you feel an integrated sensation. That sensation of scent character is what the dogs can mine.”

While the physical apparatus for detecting and analyzing the molecules in air has been under development for several years, with much of the focus on reducing its size, until now the analysis was lacking.

“We knew that the sensors are already better than what the dogs can do in terms of the limit of detection, but what we haven’t shown before is that we can train an artificial intelligence to mimic the dogs,” he said. “And now we’ve shown that we can do this. We’ve shown that what the dog does can be replicated to a certain extent.”

This achievement, the researchers say, provides a solid framework for further research to develop the technology to a level suitable for clinical use.

Mershin says he became involved with this research after a study of bladder cancer detection, in which a dog kept misidentifying one member of the control group as being positive for the disease, even though he had been specifically selected based on hospital tests as being disease free. The patient, who knew about the dog’s test, opted to have further tests, and a few months later was found to have the disease at a very early stage.

“Even though it’s just one case, I have to admit that did sway me,” Mershin said.

To read more about this research on MIT News, click here.