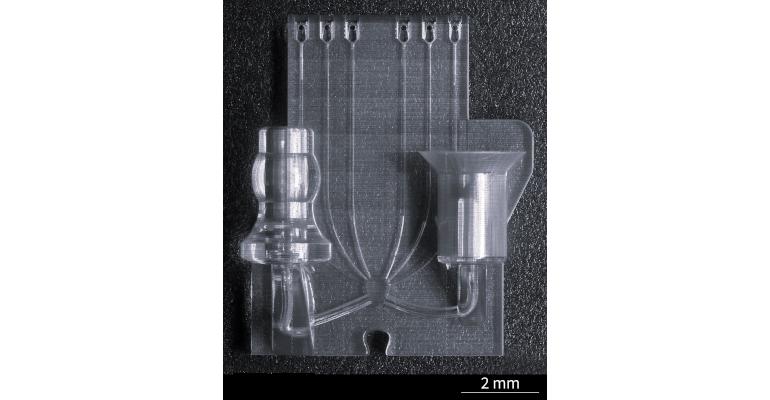 A microfluidic dynamic cell developed by Australian startup Fertilis using technology from Austrian company UpNano. The device can reduce the complexity of in-vitro fertilization and potentially improve the outcome of the process.
A dynamic cell culture created with a unique material and a 3D-printing fabrication process can potentially improve outcomes for prospective parents.

Researchers have produced a novel dynamic cell culture that has the potential to dramatically improve in-vitro fertilization (IVF) using a unique polymer material and 3D-printing process, they said. The technology—a combined effort between two companies, UpNano GmbH in Austria and Adelaide, Australia-based startup Fertilis—can reduce the complexity of the IVF process and thus the stress put on embryos during implantation, according to the companies.

UpNano is developing the material, called UpFlow, which can be used in tandem with the company's NanoOne 2PP printer to create a new type of dynamic cell culture microfluidic device, which was developed by IVF specialist Fertilis. The device makes the IVF more straightforward for patients, saving them financial resources and also relieving some of the emotional burden that IVF can put on those seeking to conceive a child this way, said Marty Guavin, CEO of Fertilis.

Indeed, IVF can be a complex time, not just for parents seeking to conceive a child but also for the embryos that they hope will result in a pregnancy. The process today typically involves multiple steps that require embryos to be moved between different environments, which can reduce the chance that they are viable and thus can require multiple implantation processes to achieve success.

Fertilis's 3D-printed microdevice—which is based on UpFlow, a photopolymerizing material—can reduce the number of implantations needed by 30 to 40 percent, Guavin said, which improves the chance that the process will have a desired outcome.

“Our device allows fertilization, embryo culture, and embryo cryopreservation to occur in the one structure—no more moving embryos around by hand," he explained. "This, in fact, increases the success rate significantly and reduces time, costs, and stress for the parents."

Functional Design for the 3D-Printing the Micro-Device

Specifically, Fertilis has created a 3D-printed micro-device based on UpFlow that automates the critical life phase between fertilization and implantation of the embryo in the IVF process, the companies said. The device, which is 0.05 millimeters in diameter, allows scientists to precisely monitor and control the culturing process of the fertilized egg, Guavin said. This eliminates the need for IVF practitioners to move cells between petri dishes and thus put stress on the embryos that could limit their viability.

Certain aspects of the UpFlow material and the NanoOne 2PP printer used to print the device made the features of the device possible, the companies said. One aspect of UpFlow that lent itself to the design is its unique viscosity, which is lower than any other material used in 2PP printing, explained Denise Hirner, chief operating officer and co-founder of UpNano.

To create a material with this feature, UpNano choose specific base resins for UpFlow that keeps the viscosity low until a final UV exposure hardens the material and makes it ready to use, she said. "This allows for a far superior post-production processing, especially the flushing of the very fine channels"—which are smaller than a human hair—"to remove unpolymerized material and ensure reproducibility of structural elements," Hirner said.

UpFlow also features a high optical transparency, which makes it well suited for microscopic inspections of embryos in incubation as well as a low autofluorescence, Hirner added. The NanoOne 2PP printer not only fabricated a micro-device of high quality, but also did it with unprecedented speed, cutting the time it took to print the embryo-incubating device from two weeks to four hours, Guavin said, calling it "an exceptional acceleration of the production process."