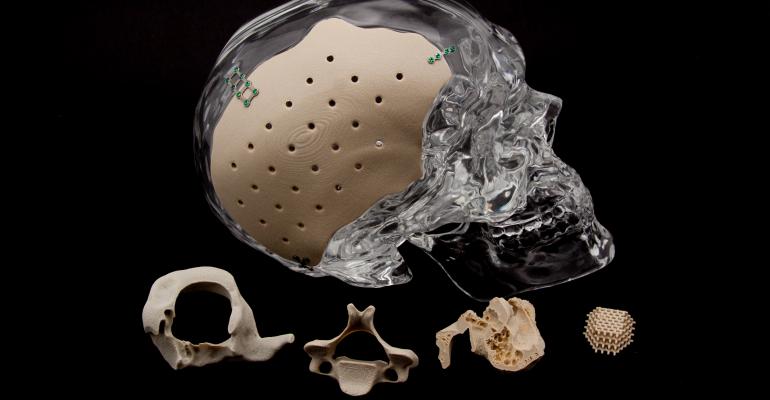 Image courtesy of Oxford Performance Materials
Manufacturing in Japan is expected to begin late this year with products for sale in Asia in 2019.

“We are uniquely ready for Japan,” Scott DeFelice, OPM's chief executive officer, told MD+DI. “In Japan, they prefer not to use harvested bone or allografts, and they are very sensitive to metals. They have a deep appreciation for materials science, as they do in Singapore and China.” The news release also cited market growth in Asia, as its healthcare industry is expected to grow by 11.1% to $517 billion in 2018, according to Frost & Sullivan.

OPM’s material of choice, PEKK (poly-ether-ketone-ketone), is osteoconductive and promotes bone-ongrowth, DeFelice said. It is biomechanically similar to bone. “If a material has the same modulus as bone, it does less damage and is healthier for the bone. For instance, metal can damage the bony interface.”

3-D printed PEKK is also inherently antibacterial, requiring no coating or eluting chemistry that would also require a multipart, pharmacological regulatory submission, he said. It is also radiolucent and compatible with MRI procedures.

OPM can serve as a materials or manufacturing partner as well as an OEM and regulatory filer itself. (OPM received U.S. FDA clearance for its OsteoFab cranial implant in 2013 and its fascial implant in 2014.) “We can go from a proprietary polymer to device to distribution,” he said. “It’s sort of what you have to do with something so fundamentally different, something disruptive. In medtech, there’s so much vested cost in development, so it’s really hard to buy in to new materials and processes. You have to do a lot of it yourself.

“Companies don’t always have the capability and infrastructure to innovate,” he added. “We have to develop proof and go to companies with a good package.”

DeFelice calls the use of PEKK “disruptive” given the traditional use of other materials. In terms of innovations, he does see a lot of companies adopting 3-D metallic printing. “That’s their comfort zone, and they see the virtue of additive manufacturing technology,” he said. “But high-performance thermoplastics and polymers allow you to drive cost efficiencies and performance, and the orthopedics market is not immune to that.”

OPM’s new partner, JSR “has built an impressive personalized medicine ecosystem, with capabilities in medical 3D software, drug discovery and delivery, and biologics,” DeFelice stated in the release. “JSR’s regulatory expertise and partnerships with healthcare providers, including joint development of the JSR-Keio University Medical and Chemical Innovation Center (JKiC), are unique in the region, and JSR will be a strong, influential partner to OPM. We are extremely pleased that JSR has decided to finance the OPM Asia enterprise and work with us to establish the OPM technology platform throughout Japan and the wider region.”

The partnership is also in line with OPM’s interest in developing a new medtech business model—serving outpatient centers directly. “Independent surgical centers are growing, and we are building a business model around those models," DeFelice told MD+DI. "They offer clinical efficacy at a lower cost, which is core to our business model.”

“You’re catching us as we are internationalizing our technology,” he added. “We’ve established a global best-in-class technology that made it through the rigorous U.S. FDA regulatory system. We are already selling implants globally, and now we are ready to expand.”

DeFelice will serve as CEO of OPM Asia and serve on its Board of Directors.